“We are extremely honoured to be recognised for the work we are doing bringing Australian innovation to the commercial and maritime space.”

The award recognises the achievements of SMEs in commercialising innovation in the maritime industry and is widely recognised by commercial and maritime operators as well as the defence industry.

AirBerth® manufactures a range of Boat Lifting Systems made entirely from High Density Polyethylene, a material impervious to the damaging effects of marine growth or electrolysis.  Raising the boat out of the water on an AirBerth® then prolongs the life of the boat by eliminating the need to anti-foul the boat and also protects the metal parts such as propellers and rudders from electrolysis damage.

AirBerth has many customers around the world including:

“Winning an award like this recognises the effort of many, in particular, I have to thank our team at AirBerth particularly Justin Lye our Marketing Manager; Jürgen König our Operations Manager and Tim Chan our Finance Manager, for their hard work and persistence.”

“We must also acknowledge the great service and loyalty of our international distributor network, which extends over 30 countries across the globe, many of whom have been partnering with us for over 15 years.”

Finally our association with AIMEX (Australian International Marine Exporter) and the newly formed ACMG (Australian Commercial Marine Group) has been a key part of our export success overseas.”

“However, we would not be where we are without the support of the most important people in our business, our customers. Their continued belief in our product and our service is the real testament to where we are today and also where we are heading.”

Winning the 2015 Maritime Australia Limited – Civil Industry National Innovation Award, caps off a terrific year for AirBerth.  Earlier this year in May the team were awarded an Export Recognition award at the 2015 Club Marine Australian Marine Export Awards, recognising their export achievements on the global stage. 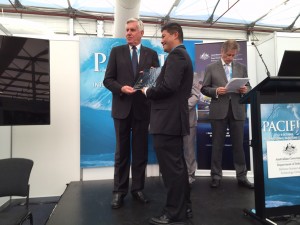 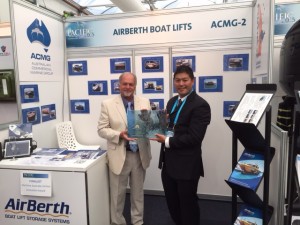