In addition, it was proposed that Exemption 5: Marine Safety (Tenders and auxiliary vessels) Exemption 2013 be repealed, with the arrangements in Exemption 5 covered by Exemptions 1, 2 and 3.
The changes to these four exemptions:
 implement new non-survey arrangements for volunteer marine rescue (VMR or ‘Scheme R’) vessels and fire service vessels;
 align the exemptions with the new definition of tender vessel contained in Part B, General Requirements, of the National Standard for Commercial Vessels (NSCV);
 create more flexibility around the definition of existing vessel and the treatment of existing vessels being upgraded or modified, or which change operations or operational area;
 implement a new ‘high risk’ list, which identifies those vessels which are not eligible for non-survey status; and
 remove overlaps between the exemptions.

Other minor changes to Exemption 2 have been made which align terms used in the exemption with other instruments. For example, the definitions of fast craft and inshore operations have been aligned with Part B of the NSCV.

In addition, further changes to Exemption 3 have been made which exempt certain low risk vessels from the requirement to hold a Certificate of Operation.

Consultation on the proposed changes was undertaken online, and six submissions were received. All issues raised by stakeholders through the submissions are identified in this report, together with a response to each issue. It is emphasized that the comments contained in this report have been made by stakeholders, and do not necessarily reflect the views of the National Regulator.

All of the revised exemptions will commence on 1 July 2016. 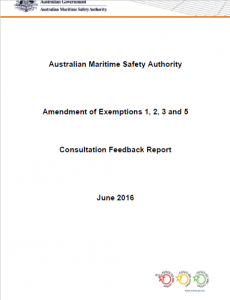