Hundreds of shipbuilding jobs under threat at BAE Systems in Melbourne 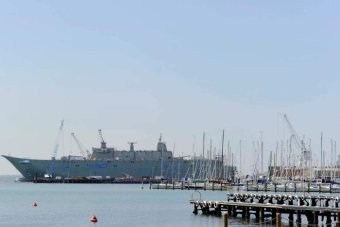 Hundreds of naval shipbuilding jobs are on the line in Melbourne because defence contractor BAE Systems has decided not to tender for a project to build new patrol boats.

The company told staff at its Williamstown shipyards this afternoon that it would not tender to build up to 21 new Pacific patrol boats, a contract that would be worth almost $600 million.

An internal BAE memo obtained by the ABC said the company would not bid to design and build the boats because the Federal Government was not expected to award the contract until early 2017.

BAE maritime director Bill Saltzer said that meant production would not begin until the end of 2017 or early 2018, well after work at the shipyards is due to run out.

“Reconstituting a workforce in 2017-2018 to produce Pacific patrol boats would not be economically viable,” Mr Salzer said.

The project would involve replacing the existing Pacific patrol boat fleet, which is donated to a dozen Pacific states including Papua New Guinea, Fiji and Tonga.

Hundreds of jobs have already been axed at BAE in Melbourne because work is drying up at the yards.

‘Nail in the coffin’ for Australian shipbuilding

“I can’t see how it can maintain any sort of work into the future when there are big gaps in the workflow,” he said.

“At the end of the current work they’ve got now, there would be a gap of probably more than 12 to 18 months, no employer’s going to be able to hold staff over for that.

“There is plenty of work that needs to be done in this industry, but it won’t be getting done in yards like Williamstown because the Government just will not support the industry in Australia.”

BAE Systems employs up to 1,100 workers at Williamstown.

The union believes around 800 of those jobs are at risk.

Employee Dave Vickers said the decision not to bid for the contract came as a surprise, because the company had spent a lot of time and money on it.

“The people who were actually working on the bid came back to the office yesterday and they were devastated, they really did expect it to go in,” he said.

“It’s just another nail in the coffin for shipbuilding in Australia.”

“That was the light at the end of the tunnel that’s just been snuffed out, so it’s pretty disappointing,” he said.

Mr Saltzer told a Senate Committee hearing in April the company was examining the viability of its Williamstown shipyard, warning shipbuilders had already reached the so-called “valley of death”, and could be forced to close.

The Victorian and South Australian governments have recently pleaded with the Commonwealth to keep shipbuilding jobs in Australia by placing further orders for work.

Victorian Industry Minister Lily D’Ambrosio said she had written to the Defence Minister Kevin Andrews urging him to consider the consequences of failing to place timely orders.

“We have projects that are available, but we need a Federal Government that understands the importance of not only placing orders but making timely decisions on orders,” she said.

“There is absolutely no certainty coming from the Federal Abbott Government.”

A spokesman for Mr Andrews said the former Labor government did not commission a single naval vessel, leaving the shipbuilding industry in a precarious position.

“The shipbuilding losses that are now occurring could have been avoided had the necessary decisions been made by Labor,” he said.

“This is indeed Labor’s ‘valley of death’.”

The Abbott Government said it was committed to supporting a productive and cost-effective naval shipbuilding industry in Australia.

“We will lay out a clear, fully-funded plan for a strong and secure Australia,” he said.