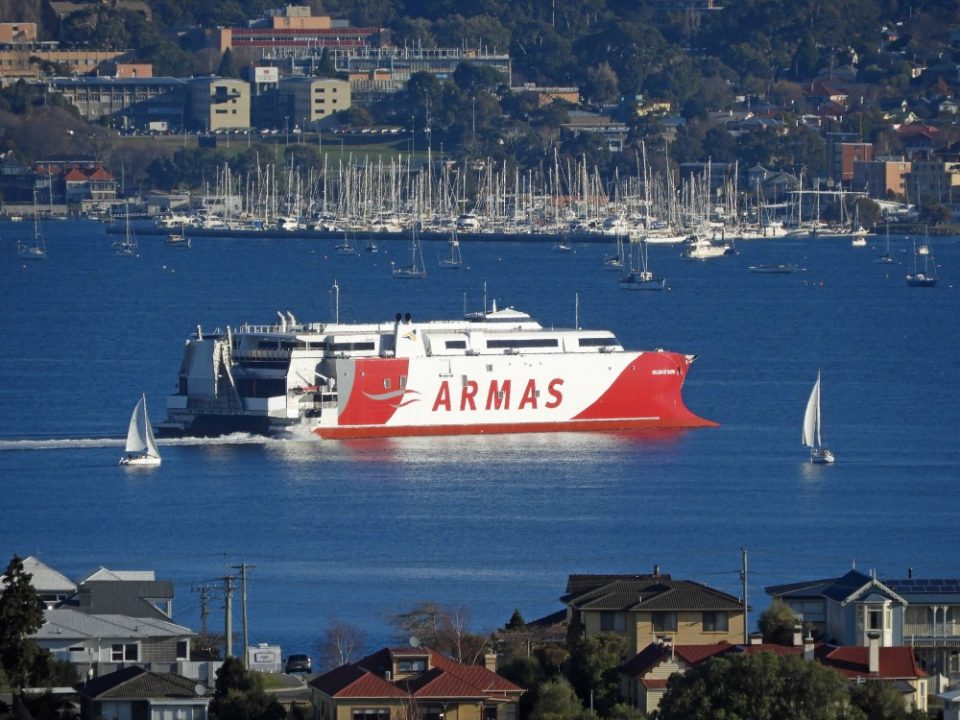 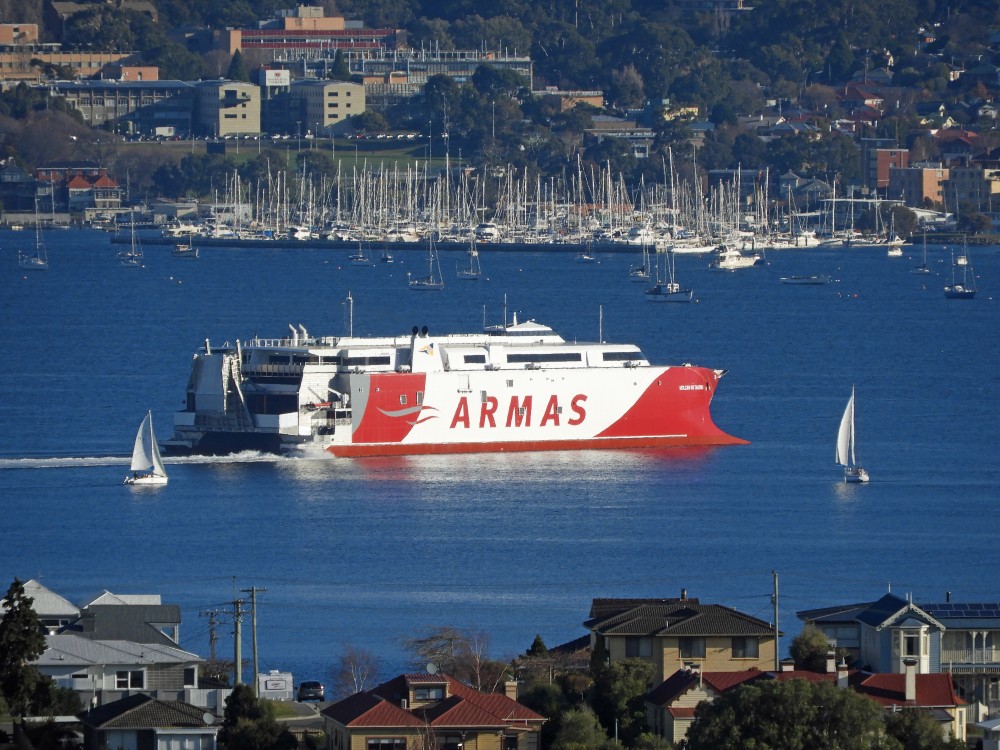 The ship, named Volcan de Tagoro (Incat Hull 091) is impressive in her distinctive red Naviera Armas livery. 091 completed sea trials over the past few days, loaded fuel and supplies yesterday for the delivery voyage to Spain, and has now left Australia.

The delivery will be via Auckland, across the Pacific Ocean to Tahiti and the Panama Canal before crossing the Atlantic on her way to Spain. The Volcan de Tagoro crew arrived in Tasmania late June to familiarise themselves with the ship and participate in the sea trials.

Naviera Armas SA will operate the vessel on Spanish routes, including the Canary Islands.  The company has an extensive fleet of vessels, and Volcan de Tagoro will be the fifth Incat vessel operating in the Armas fleet, however it is their first newbuild from Incat Tasmania, having obtained their other Incat built vessels on the second-hand market.

Volcan de Tagoro has capacity for 1200 persons, including crew, and the expansive vehicle deck allows for almost 600 TLM (595 truck lane metres) plus 219 cars, or in car-only mode it can accommodate 401 cars.  Passenger spaces are divided into three classes, First Class, Business Class and Economy, each area offering bars and food service areas.  A gift shop and children’s play are are also located on board.

Incat CEO Tim Burnell said “Our team at Incat have been busy, this is the second large vessel delivered in just six months.  We have been building 091 for two years so it was great to see many staff show family members through the ship last week, clearly proud of their workmanship on the vessel.  We are seeing an unprecedented level of interest in both large and small aluminium ferries at present and have expectation of operating at maximum capacity for a number of years. The contract, in excess of A$100 million to Incat has also provided significant income to suppliers and sub-contractors”.

Incat’s Prince of Wales Bay shipyard is continuing construction of three large vessels plus a 35‑metre commuter ferry the Geelong Flyerwhich will operate between Geelong and Docklands in Melbourne from early December.

The next export vessel is a 100-metre ship for Trinidad and Tobago to be completed in 2020, followed by another 111-metre ship for a European operator in 2021, the design team at Incat and Revolution Design are also hard at work on the design drawings for a 130‑metre catamaran for service between Argentina and Uruguay, that will be the largest ship Incat has contracted.