Number 14 is Launched from MEC 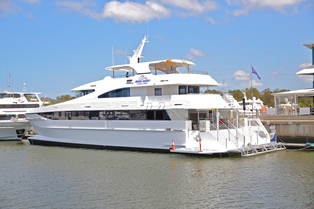 “Evolution” is the latest addition to the fleet for the Down Under Cruise and Dive Company in Cairns, and is set to operate out of Cairns as a day dive boat for tourism onto the Great Barrier Reef.   The vessel is 33m long with a 10m beam with 4 decks and has AMSA 1C and 1D classification for 200 and 300 passengers, depending on the area of operation.

Evolution was 15 months in the build after the owner had a refit done with MEC on their 85’ yacht and saw the capability of MEC in the commercial build arena. Up until the last five years MEC have been mainly Superyacht focused, however with the downturn in that area decided to focus on the commercial sector which at the time was mainly oil and gas. Now the focus has shifted to also include tourism.

With its own aft platform and 2 rear side platforms that hydraulically lower and raise, Evolution acts as its own pontoon. Once moored, the semi-submersible and glass bottom boats then operate from Evolution for an extraordinary tourism experience whether the guests are diving or snorkelling.

Evolution is equipped with 5 toilets, full bar and galley and lounge seating on both main and upper deck. Exclusive to Evolution is the VIP lounge area on the wheelhouse deck level with its own bar fridge and TV for private groups to entertain in luxury.

Other design-led features are a large viewing and lounge areas located on the upper and fore decks. Evolution is fully air conditioned, boasts large TV’s and sound system in the main and upper saloon areas which will be used for entertainment and dive briefings, each seat has a USB charging port.

The vessel is powered by twin 1500hp MAN Diesel engines giving Evolution has a maximum cruising speed of 25 knots.

MEC currently have another 30m vessel and a 15m vessel under construction. Other projects completed by MEC have been Whale watching vessels, Ferries and Cruise vessels for Darwin, Gladstone and Sydney along with patrol vessels for QLD Marine Parks.

MEC owner Murray Owen said the features on Evolution such as the dive and snorkel platforms along with the high standard build quality compared to luxury vessels sets their build apart from those operating in the dive tourism industry.