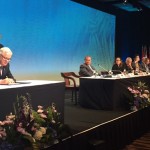 The historic Trans Pacific Partnership Agreement (TPP) – which will see the elimination of 98 per cent of tariffs among 12 countries – was formally signed today in New Zealand by the Minister for Trade and Investment Andrew Robb.

The TPP is the world’s most significant trade and investment agreement finalised in more than two decades with member countries accounting for around 40 per cent of global GDP.

Australia’s exports of goods and services to these countries were worth $109 billion last year – a third of Australia’s total exports. In 2014, Australian investment in TPP countries was 45 per cent of all outward investment.

Tariffs will be eliminated on US$9 billion of Australia’s dutiable exports to TPP countries, including $4.3 billion worth of agricultural goods with new levels of access for beef, dairy, sugar, rice, grains and wine. A further $2.1 billion of Australia’s dutiable exports will receive significant preferential access through new quotas and tariff reductions.

“The tariff cuts will deliver material gains for our exporters across the board and place downward pressure on the cost of imported goods for households and businesses, but the benefits that will flow from the creation of a more seamless trading environment are not well understood,” he said.

“The embrace of paperless trading, streamlined customs procedures and trading rules, assistance for SMEs, more seamless data flows and greater flexibility with data storage, are all features of the TPP. The agreement also contains provisions to help stimulate new investment and as experience shows, when you deepen trading relations increased investment inevitably follows.”

The TPP sets in place common rules for labour, the environment and for the first time in a trade treaty, rules to combat bribery and corruption. It will also ensure private companies and businesses are able to effectively compete against State Owned Enterprises (SOEs).

Some of the services areas that will benefit include Mining Equipment Services and Technologies (METS), professional services such as legal, architectural, engineering and surveying services; financial services, education, telecommunications, IT, transport, health, hospitality and tourism. Australian companies will also have new opportunities to deliver government procurement services.

Mr Robb said the TPP – which was open to other countries to join in the future – offered a pathway to a free trade area across the entire Asia Pacific region. “Given its reach and potential this is an agreement we simply cannot afford not to be part of,” he said.

Each TPP country will now follow its own domestic treaty making process before the agreement can enter into force. In Australia this will include a Joint Standing Committee on Treaties (JSCOT) inquiry and the consideration by the parliament of any implementing legislation or amendments.