Marine propulsion and gyro stabilisation company, VEEM Ltd (ASX: VEE) (‘VEEM’ or ‘the Company’), advises that subsequent to successful trials with Damen Ships in the Netherlands, VEEM has received an order to supply the first of its largest gyro stabilizer, the VG1000SD.

The VG1000SD unit produces 1000 Knm of torque which has the ability to stabilize a vessel of nearly 700 tonnes.

Damen plan to install the VG1000SD in a newly released new high-speed crew transport vessel, the FCS7011, which is under construct at present.

The FSC7011 uses a combination of VEEM gyro stabilizers and the latest Ampelmann L-type gangway system which creates a step change for marine access solutions.

Production of the VG1000SD has commenced and the final assembly will take place in VEEM’s newly leased purpose build gyro assembly hall due for completion in July 2019.

VEEM Chairman, Mr Brad Miocevich said: “This new assembly hall will have built in capability to fully test load all models of the VEEM gyro range to ensure the highest quality and reliability can be delivered to our customers.”

The VVG1000SD going into production is the final model planned for production in the VEEM gyro range. There are four models currently manufactured by VEEM. The VG120SD, VG145SD and the new VVG1000SD. The current phase of the VEEM Gyro design project is nearing completion and all attention now moves to the manufacture and sales of the existing models. 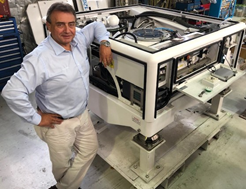 Sales of VEEM’s new ship gyrostabilisers will be assisted by the appointment of Dr Steven Vidakovic as Global Business Development Manager – Gyrostabilisers. Steven has more than 30 years of engineering, project management and sales experience, having most recently served as Global Sales Director for Naiad Dynamics, an international supplier of marine fin stabiliser and ride control systems until the end of 2016.

He previously led the management of several projects at the world’s largest research-based pharmaceutical company, Pfizer Inc., while taking on the role of Associate Director for its Worldwide Pharmaceutical Sciences Global Supply Chain division. Dr Vidakovic holds a B.E. in Aeronautics and hhas completed a PhD in Aerodynamics/Fluid Mechanics from The University of Adelaide. He also holds a Masters of Business Administration.

Dr Vidakovic, will be based in Australia, and has taken up his position with VEEM.

VEEM Managing Director, Mr Mark Miocevich said: “this key appointment underpins the future sales growth of our unique gyrostabiliser products as well as assisting with the acceleration of sales of our patented VEEM Interceptor propellers and VEEM’s Conquest propellers, adding his substantial global sales experience to grow the VEEM network.”