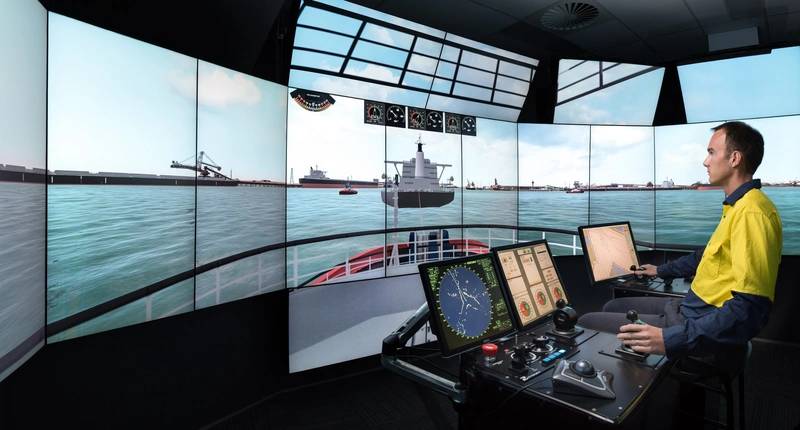 The Australia Ship Simulation Center, owned and operated by HR Wallingford, has moved into new premises from where it will continue to provide expert navigation consultancy and a dedicated pilot training center for Western Australia and the wider region.
HR Wallingford UK’s Chief Executive, Dr. Bruce Tomlinson and Dr. Mark McBride, Ships Group Manager, joined Ben Spalding, Manager of the Australia Ship Simulation Center, in inviting clients, Pilots and members of Western Australia’s maritime community to explore the new facilities, which include state-of-the-art ship and tug simulators.
“I opened the Atwell Arcade last year, so it is fitting that I’m back to open these new facilities,” Pettitt said. “It is really good to see this restored heritage building, now housing today’s state-of-the-art technology. I am delighted that Fremantle is able to continue to host such a high level of expertise in marine operations, and support the maritime industry across Western Australia and further afield.”
For more than 25 years, HR Wallingford has been developing bespoke simulator-based systems and training courses to support harbor authorities in providing continuous professional development (CPD) for Marine Pilots and Tug Masters, with a particular emphasis on developing best practice, emergency procedures and non-technical skills. During this period the marine industry has undergone a number of significant changes, including the challenge to service larger ships such as 400m long container vessels, combined with a considerable change in tug towage techniques. These changes, combined with increasing commercial pressures, have made tug and ship simulation an essential part of ensuring the safety of vessels within port limits.
HR Wallingford currently provides ship simulation and CPD training services to the Pilbara Ports Authority, who operate Port Hedland, the world’s largest bulk export port. Port Hedland, which exported over 460 million metric tons of cargo in 2015/16, is in the process of managing many of these growing challenges. McBride said, “To support the training requirements of Pilbara Ports Authority, we have developed accurate ship maneuvering models to simulate close quarters operations at Port Hedland which the Pilots can train with.”
Capt John Finch, General Manager at the PPA and Harbor Master of Port Hedland said, “One of the main advantages of the training provided at HR Wallingford’s facilities is that we are able to include the full maneuvering team from Pilots to Tug Masters and Vessel Traffic Service operators. We are also pleased that the training covers important non-technical skills such as cooperation, communication, decision making, and conflict and error management, which are equally critical for ensuring safe navigation within a whole port resource management environment.”
The reception was attended by a number of HR Wallingford’s other clients in the region and Pilots, such as those from Chevron Australia, a foundation partner of HR Wallingford’s Western Australian simulation center.
HR Wallingford has worked with Chevron Australia for more than five years at its local ship simulation facility, and is delighted to continue this partnership using the improved facilities that the new Australia Ship Simulation Center offers.
HR Wallingford also offers expert consultancy for port design. McBride said, “Vessel navigation is a fundamental part of port and terminal design, and it’s crucial that ship handling issues are taken into account at all stages of the planning and design. The simulation facilities we have developed provide reliable and realistic ship simulation, together with the flexibility to accommodate rapid modifications within the design process. Our U.K. Ship Simulation Center shares the same software and hardware which gives advantages for continued development, and allows us to respond rapidly to make software or hardware updates.”
– Marine Link