The Best Kept Secret in Shipbuilding 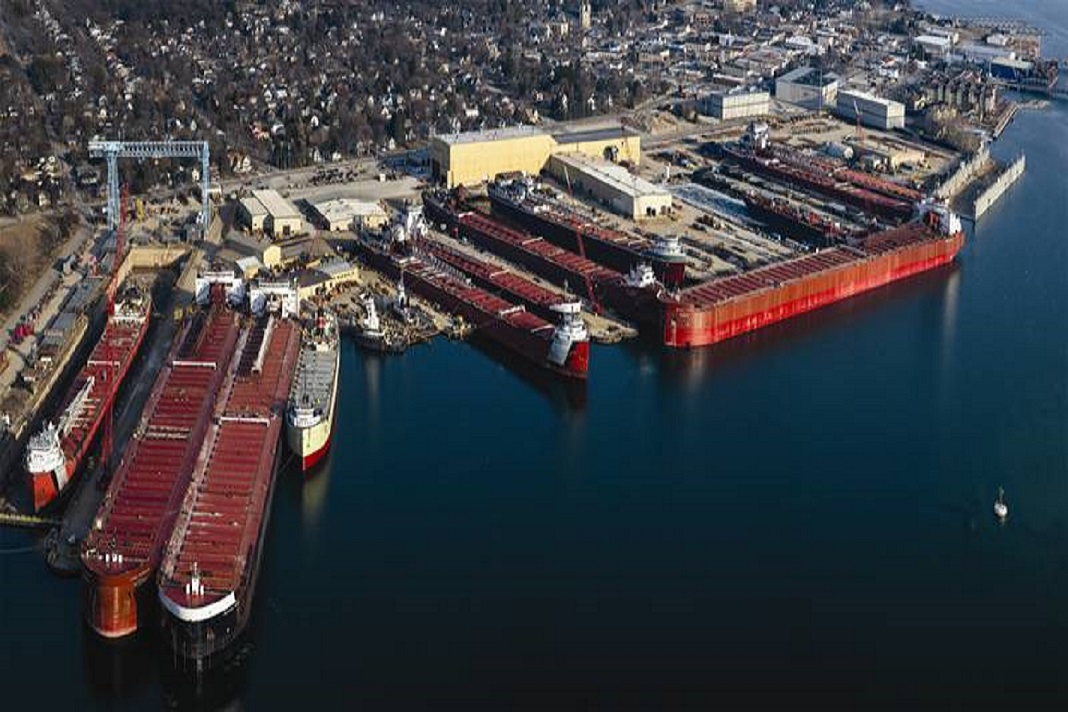 In 2009, Italian shipbuilding giant Fincantieri S.p.A, purchased the assets of the Manitowoc Marine Group; which included Bay Shipbuilding Company. Located in Sturgeon Bay, Wis., Bay Shipbuilding was the “feather in the cap” with their long history in U.S. commercial shipbuilding and repair. Maritime Reporter & Engineering News recently visited the shipyard and found an enviable level of new builds and repair activity; which gave us a better understanding why the yard is dubbed the “best kept secret in shipbuilding.”

Can you share with us your background and area of responsibility?

I’ve been the Vice President and General Manager of Fincantieri Bay Shipbuilding since assuming the role in August of 2012. I’ve been with the company for 32 years and I’ve served in various capacities; starting out in the manufacturing field. From 1991 to 2012, I worked primarily in our repair/conversion division, before I took this role in leading the organization.

You call this place the “best kept secret in shipbuilding.” Why?

We do the full gamut of shipbuilding and associated maritime services; from repair and conversion to new construction. We have all aspects of shipbuilding and repair disciplines onsite. I think that is one of the value propositions that we offer; we still harbor all the crafts required to build and repair vessels. We do have valued turnkey subcontractors that help to smooth out the peaks and valleys of our business, but we still have all of the disciplines of shipbuilding under our roof and in our employee base.

How many people do you employ?

We’ve got about 700 production employees, and 100 plus office and management staff. Our employee base will swell to more than 1,000 when we enter our busy winter repair season, which typically starts in December and generally ends by the end of March.

This obviously coincides with the severity of the ice and shipping conditions on the Great Lakes. Is it always on this exact schedule?

No, it is not. Last year was somewhat of an anomaly, we had boats here well into the spring and summer months; as we had some very large projects with scrubber installations and retrofitting coupling systems on some ATBs that took longer.

What does a typical winter repair season look like?

Every year we take an aerial photo to document the winter fleet. Depending on the geometry of the vessels in for service, we generally have 16 to 18 vessels in for service over the winter, ranging from 1,000 x 105 foot ore carriers down to 500 foot cement carriers and tugs. This is for the most part, a captive fleet to the Great Lakes; the ore carriers, the stone carriers, the cement and the coal carriers. Typically we host six to eight customers; recently we have been able to attract Canadian business as well, including work for CSL, Algoma, Lower Lakes Towing and others.

Is it generally always the same carriers and vessels?

Year on year there are a number of fleets that bring their entire group of boats here; three to four vessels in our yard. One of our strategies is to target the drydockings and to ensure that the drydock is always occupied, year round. Over the winter we will cycle four to eight boats through that graving dock.

You cycle vessels into the drydock, even when everything is iced over? How?

How do you keep the bottoms ice free?

We put bubble tubes down there. We lay a series of air tubes below, and we pulse air through the tubes, creating bubbles, which helps keep the bottoms ice free. We’ll put divers down under the boats two to three weeks before we drydock the vessel to confirm its ice free, and if necessary, to move the bubble tubes around or augment the bubble tubes with “ice eaters”. We’ve tried a number of non-traditional means, such as keeping heat in the ballast tanks, pumping steam into the ballast tanks in an effort to eradicate the ice if it builds up. We are one of the only freezing ports that cycle boats through the graving dock (during the winter). If we didn’t do this, the owners would have to pull the boats out of service during the prime shipping season. Is it cheap to drydock a boat in winter? No! But the trade-off is our customers having boats in drydock during the prime shipping season. Once our winter season starts, its seven days a week, 24 hours per day to get the work done.

So what percentage is this of your repair business?

We do 60 to 70% of our repair work during the winter months. But there is a flow all year long, as our repair business has steadily grown. Ship repair in total is about 30 to 40% of our business.

What’s the biggest challenge on running a successful repair business?

It’s the timeframe to get the work done. The fleets are aging, so the jobs tend to be bigger, but need to be executed in a shorter period of time. Older boats can also face challenges with regulatory issues.

What are the unique challenges of running a successful ship repair and new construction business in the same yard?

There are people that believe you can’t do it. I don’t see it as a challenge; I see it as a benefit. The backlog of new construction allows you to market yourself as a good place to work with some longevity. Maritime is cyclical. Our new construction has allowed us to stabilize our labor base by attracting new young people into the business as a viable, year-round job. It gives us flexibility in the case of emergency repairs to have a large employee base that understands both ends of the business.

Looking at employees; finding and keeping good employees seem to be a perpetual challenge in the maritime industry. How do you do it?

The challenge is attracting the younger generation. It’s not always a glamorous business. You have to have an industrial sense; but once they get in the business and work it for a few years, I think they become intrigued with the maritime history and lineage. You find that lineage a lot around Sturgeon Bay; generations and whole families have worked at the shipyard. The aura of building a large vessel and seeing it sail away, or accomplishing a large repair job ….. that alone tends to build on itself and helps to keep key employees excited about the maritime business.

Do you see attitudes changing at all?

I think the tide is turning, and the State of Wisconsin is working hard to let the younger generation know that it’s okay to take up a trade; to become a pipe fitter, to become a welder, etc. You can make a good living with industrial means.

Obviously the acquisition by Fincantieri was a significant point in this facilities history. Can you point to how its ownership has resulted in infrastructure investment?

I think their investment is visible in all aspects of our business. We’ve invested in equipment like carnage, burning and cutting equipment. We’ve made brick and mortar investments and in outfitting buildings; recently we’ve invested in property in the form of a neighboring shipyard (Palmer Johnson) that became available. We’ve built a floating drydock (2012). Since 2009, Fincantieri has invested more than $40 million in our operation.

Can you tell me a bit more about the Palmer Johnson acquisition?

The courtship was more than a year long and we finalized the purchase in the spring of 2016. It started out as a request to rent some warehouse space, and it turned into an acquisition of buildings that fit well within our current operation. It really was a unique deal, and I don’t think you would get the chance again to buy property that is literally homogenous to your existing property. These are buildings purposefully built for maritime activities, so it seemed to make sense. It adds capacity. We view it as an extension of our fabrication buildings, and we see the opportunities coming down the pike lending themselves to that, which is the ability to build almost completely indoors.

What products are coming down the pike?

We see the tug business, the ferry business and some small boat markets as having good potential.

When will the new facility be integrated into your operations?

50% of it is up and running now; 70% will be up and running by year’s end. There is a fabrication bay where we will increase the lifting capacity to 200 tons, and with that comes the strengthening of the building and raising the roof to allow for a 55 foot hook height and a 200 ton lifting capacity. By the summer of 2017 it should be completely integrated.

On the tour of the yard I saw a lot of activity. Can you give to me a rundown of the business in the yard at the moment?

The first of the Kirby ATBs will be delivered by the end of the month (October). We’ve got the second Kirby ATB coming behind that. We are starting on our AMA project, which is an 185,000 barrel barge with an 8,000 hp tug that will push it. Then we have another 8,000 hp tug and a 155,000 barrel barge in our backlog. We have an eight boat new construction backlog. Currently the John G. Munson, a 1950s vintage ore carrier, is being repowered; its steam power plant being replaced with a MaK diesel engine. The entire propulsion plant is being gutted and a new propulsion plant, including a Schottel CPP system, is going in. That will be delivered in the spring of 2017. I could go into full details on all of our repair jobs, but I think it best to say that our docks are fully booked through the end of the year.

In your career, is there a technology that you can point to that have helped to make the job of building and repairing vessels more efficient?

Good question. Welding technology certainly has come a long way. Some of the piping products that you’re seeing today, you couldn’t use in the past. Some things that have gotten approved by ABS and the Coast Guard such as snap-on fittings and some of the composites and plastics, have led to greater efficiency.