It was the first ship to be launched for Russia’s Yamal project and part of a 15-ship order that is supposed to help turn around the troubled shipbuilder.
The SCF Yamal – first Arc 7 ice-classed LNG carrier classed for breaking through over 2 meters of ice, and can carry 170,000 cubic meters of liquefied gas.
“World’s energy sources are in decline and many are eyeing the natural resources buried in the Arctic Circle, which is why our icebreaking LNG carrier may come in useful,” a company spokesman said. 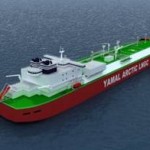 The LNG carriers are designed with three azimuthing stern thrusters by ABB for maneuverability and to permit movement astern in ice up to 2.1 meters (they are double-acting icebreakers, with greater icebreaking capacity astern).
Sovcomflot, MOL, Teekay and Dynagas have one, three, six and five vessels respectively, and all vessels are scheduled for delivery over the next four years.
Meanwhile, Yamal LNG Project has been financed in the amount of $15 bln, Chief Executive Officer of Russian natural gas producer Novatek Leonid Mikhelson said. Chinese partners invested about $5 bln and French partners — $3.7 bln.
Source: MarineLink