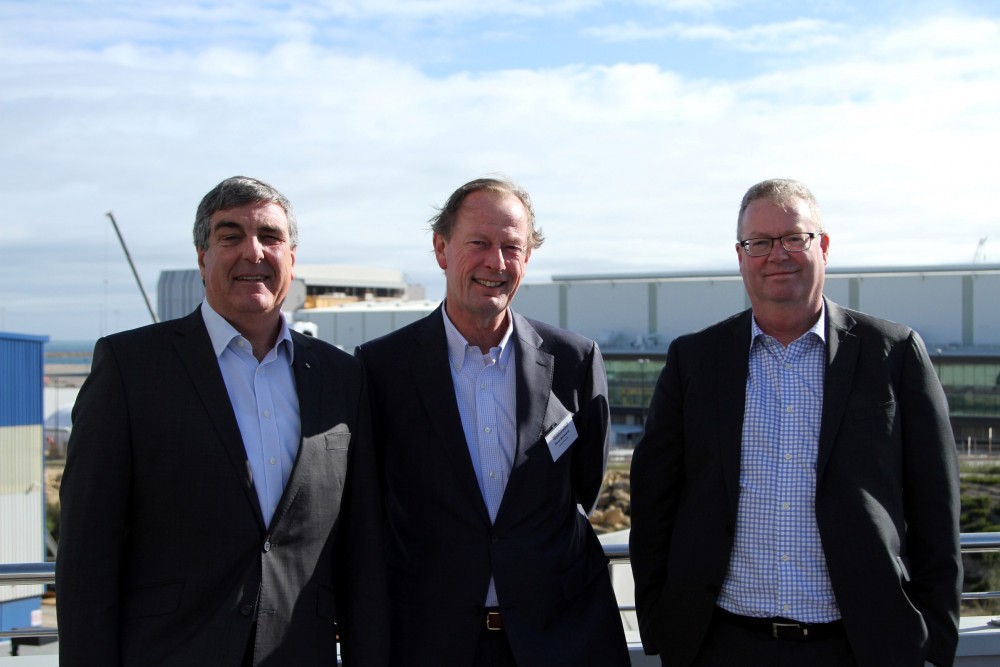 11 July, 2017: Signifying its commitment to the SEA 1180 Program, Damen Shipyards Group has sent a high level delegation to meet with key members of the Australian shipbuilding industry. With an eye on maximising local industry content and ensuring long-term Australian jobs, the aim of the visit was to strengthen business relationships borne out of the Damen Industry Briefings held earlier this year. The delegation forms an integral part of Damen’s tender for the design and construction of 12 Offshore Patrol Vessels for the Royal Australian Navy.

The Damen team comprises Damen CEO René Berkvens, Area Director Asia Pacific Roland Briene as well as Director Procurement Jacob Biemond. They have been joined by a number of Dutch companies and their Australian partners as they continue to build their relationships and seek to build the highest levels of Australian content for the new OPVs. Reflecting the geographical scope of the Australian government’s SEA 1180 Programme – and the goal of maximising Australian Industry participation – the Damen team is meeting with business representatives from all around the country this week.

Among the companies and organisations with which Damen and ASD Forgacs Shipbuilding joint venture have laid the groundwork for collaborative partnerships with are companies from the Henderson Alliance, members of the WA Chamber of Commerce and Industry, the Australian Industry & Defence Network (AIDN), Defence Teaming Cooperation and many other small and medium sized enterprises.

“The SEA 1180 Program has the potential to establish the framework for long-term naval and commercial shipbuilding capacity in Australia. An enthusiastic and effective supply chain is the best way ahead to reduce the risks involved – in terms of both construction schedule and technical coverage.“

“In total we met with about 50 companies. All companies that we have been in contact with since the Industry briefings we did in February. During these days we further established the relationships and agreements have been made. A prime example of this is the forming of a joint venture between our electrical contractor Alewijnse and their Australian partner AMS. AMS is already lined up to work on the sustainment of the Damen fleet in Australia.”

This Damen delegation follows the Industry Briefings that the company conducted in February and March in Brisbane, Melbourne, Adelaide and Perth. Aimed at making contact with local suppliers to develop a sustainable Australian supply chain, the Briefings were attended by approximately 800 people.

“We have received so much positive feedback about the Industry Briefings that we held earlier this year,” states Mr Berkvens. “We wanted this delegation to pick up where the Briefings left off – turning the business connections that we made back in the Australian summer into fully fledged professional relationships. To this end, nothing substitutes meeting people face-to-face.”

“The SEA 1180 Program will require strong partnerships – and this is what Damen offers. For us, this delegation has been the next logical step in the process of ensuring that we cut the first steel and commence construction with the maximum possible Australian content.”

Damen Shipyards Group operates 33 shipbuilding and repair yards, employing 9,000 people worldwide. Damen has delivered more than 6,000 vessels in more than 100 countries and delivers some 180 vessels annually to customers worldwide. Based on its unique, standardised ship-design concept Damen is able to guarantee consistent quality.

For nearly all vessel types Damen offers a broad range of services, including maintenance, spare parts delivery, training and the transfer of (shipbuilding) know-how. Damen also offers a variety of marine components, such as nozzles, rudders, anchors, anchor chains and steel works.

In addition to ship design and shipbuilding, Damen Shiprepair & Conversion has a worldwide network of 17 repair and conversion yards with dry docks ranging up to 420 x 80 metres. Conversion projects range from adapting vessels to today’s requirements and regulations to the complete conversion of large offshore structures. DSC completes around 1,350 repair and maintenance jobs annually.