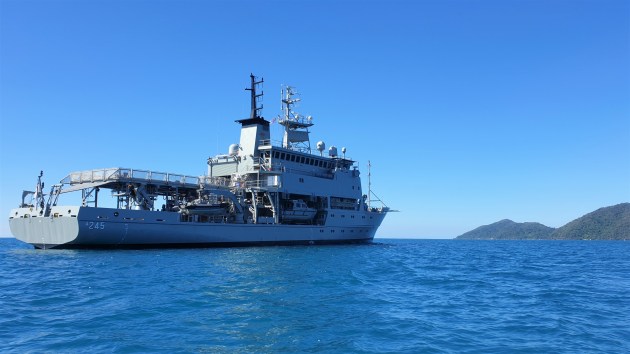 HMAS Leeuwin will be the one of the first platforms to be upgraded.

The government is investing $600 million in a new Fleet Information Environment, including upgrades to naval systems and computer networks.

A further $100 million will be invested in additional infrastructure work in Darwin, Cairns, Rockingham, Canberra and Sydney.

The project will deliver new software and hardware, based on a design which allows the system to be continuously updated and upgraded with the latest available technology out to 2040.

A Deployed Network Integration Centre will be established in Canberra where Australian companies will be able to work in a collaborative environment with Defence on testing their products for future upgrades.

“These upgrades will provide our sailors with faster, more capable and more secure computer based information systems which are all vital in ensuring our ADF can operate in contested, congested and degraded information environments,” Minister for Defence Linda Reynolds said. “As outlined in the 2020 Force Structure Plan, decision superiority in the maritime domain is essential for Defence’s ability to conduct operations.

“Australian industry and Defence have worked closely on developing and building this capability,” Minister for Defence Industry Melissa Price said.

The first stage of the upgrades to Navy platforms will commence in 2021 with HMAS Leeuwin in regional Far North Queensland.

The announcement appears to mark the de facto launch of Project Sea 2273.

Modernising the FIE was first announced in 9 April 2019 by then Defence Minister Christopher Pyne, who said that rolling out contemporary computer systems across the RAN fleet would take place “over the next decade” at a cost of around $600 million.

Pyne did not refer specifically to Sea 2273 in his April 2019 statement, nor was any project number given in the 23 October announcement. Industry sources believe the correct reference is now Sea 6036.

The existing FIE is used across the RAN fleet to exchange information within ships or between different vessels across both classified and unclassified networks.

An industry briefing in 2019 said Sea 2273 was intended to deliver a “modern, cyber-worthy, multi-enclave information system” to the RAN across four classification levels: secret, protected, official and coalition.

The new FIE would be developed using a modular design architecture to ensure the solution could be upgraded in the future.

While Defence had already developed a prototype system to test the architecture, it did not intend to “automatically” use these products for the full system design, the briefing was told.