Prime Minister Malcolm Turnbull has downplayed the effect of leaks from the French shipbuilder chosen to build Australia’s next generation of submarines.

The Australian newspaper is today reportingDCNS has had more than 20,000 pages of plans for its Indian submarine project leaked.

In April, the Government announced DCNS had won the $50 billion bid to build 12 submarines in Adelaide.

Mr Turnbull told Channel Seven that while all leaks were concerning, India’s submarines were different to those planned for Australia.

“It is a completely different model, it is a different submarine,” he said.

Timeline: The promises and policy of the subs saga 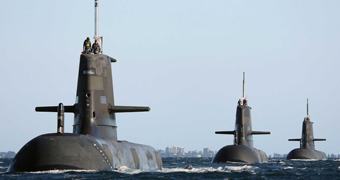 The lead up to the submarine contract has involved election promises, business and political campaigns and lots of speculation.

In a statement, Mr Pyne said he had received advice from the Department of Defence, saying today’s report “has no bearing on the Australian Government’s Future Submarine Program”.

“[The] program operates under stringent security requirements that govern the manner in which all information and technical data is managed now and into the future,” the statement said.

“The same requirements apply to the protection of all sensitive information and technical data for the Collins class submarines, and have operated successfully for decades.”

DCNS has issued a statement on the report, saying that “French national authorities for Defence security will formally investigate and determine the exact nature of the leaked documents”.

“The matters in connection to India have no bearing on the Australian submarine program which operates under the Australian Government’s arrangements for the protection of sensitive data,” it added.

‘Some cause for concern’

Andrew Davies, the director of the Defence and Strategy program at the Australian Strategic Policy Institute, said it was hard to assess the magnitude of the leak.

“I think there is some cause for concern here, while Australia is buying a submarine that is based on a different design, the design philosophies of the company probably translate from one design to another,” he told The World Today.

“So, some of the approaches, they take to acquire something and things like that might well translate over.

“But without a detailed knowledge of the submarine design, it’s very hard to assess the real magnitude of this leak.”

He said he thought there would be concerns.

“I think there’s always a concern when there’s a security breach of any sort of high tech defence equipment,” he said.

“The Americans had their own security breach of course when a large volume of information regarding the F35 Joint Strike Fighter appeared to have been hacked.

“I think there will be concerns, whether it will be a show-stopper remains to be seen.”