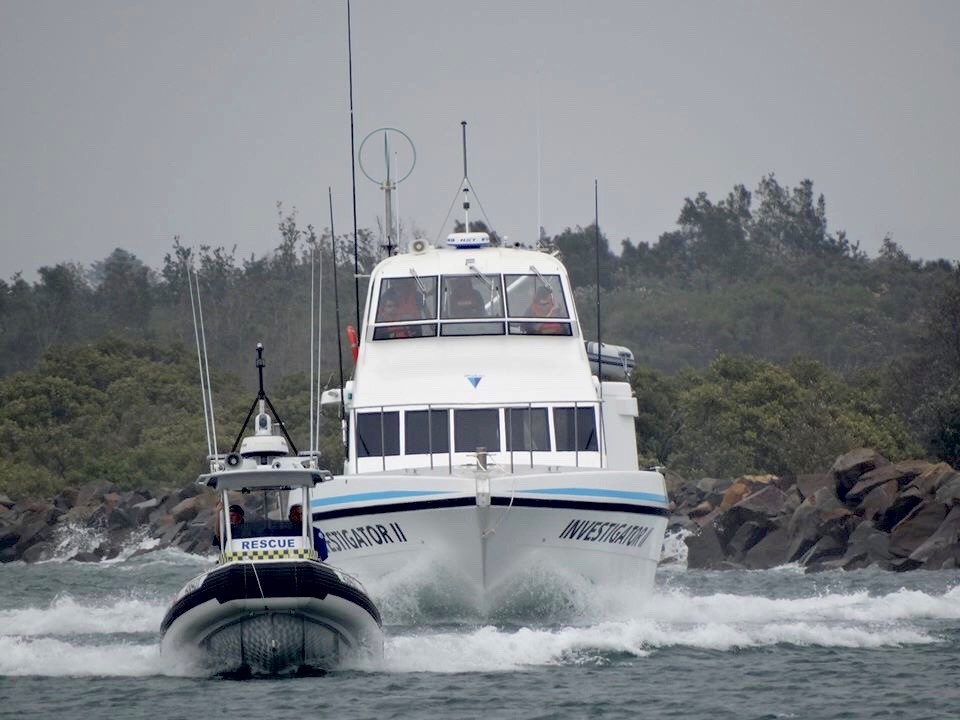 The experience of Steber International, coupled with the proven Westcoaster design, has created a niche marketing opportunity for Australia’s leading manufacturer of commercial fibreglass vessels.

At the time of writing Steber’s first and largest vessel is en route to the Republic of Mauritius and even before delivery, another export project is in the planning stages.

Steber general manager, Alan Steber “It’s been almost 15 years since the last Westcoaster was made in WA and we’ve worked hard to improve and redevelop the original design”.

“Apart from the 61ftr we have already had strong interest in the 53-58 ft commercial range from overseas clients”.

“The original design had to be upgraded to the latest Australian Maritime Safety Authority (AMSA) specifications and following the success of our first big build, we plan to capitalise on that hard
work, nationally and internationally”.

“Australia is assisting Mauritius to develop the blue economy and Investigator II is a prime example of that co-operation”, Mr Steber said.

“Thirty-two years ago we built our first boat for the Mauritius Government. It was a 41ft fishing vessel.

“A couple of years later the government bought a 47ft fishing vessel from us as a training vessel.

“Both of those boats have had no hull or structure failures over all those years and still utilise their original steering and running systems, a credit to the quality Steber have become renowned for.

The Mauritius Research Council and Mauritius Oceanic Institute have been promoting the potential of the blue economy since the extension of the continental shelf has seen the country’s exclusive economic zone expand to an area of 2.3 million square kilometres – four times the size of France.

The imposing list of features packed into Investigator II make it ideally suited to further advance research into many of these potential economic initiatives. 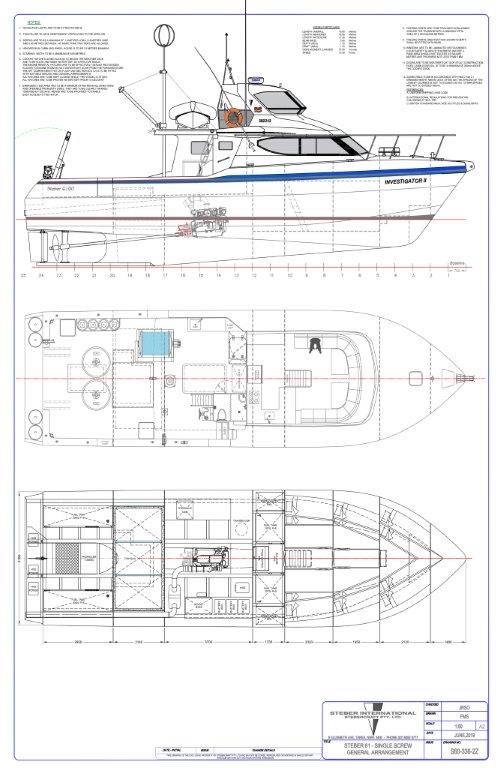 The eight cubic metre fish room is designed and insulated as a manually-iced cool room.

A transom crane system is able to launch and retrieve anchoring systems for surface and seabed fishing and can deliver FADs (fish aggregating devices) as part of the research work to be carried out on Investigator II.

Three Australian made hydraulic fishing reels compliment the deck gear onboard, capable of dropping up to three kilometres of line to the bottom. There is a clutched PTO off the main engine’s
ZF325-1 transmission (assisted by 300 litre hydraulic oil reservoir) that is coupled to all the hauling systems onboard, including a drum line capable of deploying long lining and pot capture equipment.

The boat includes a saloon that can seat up to 12 people in relative comfort with a large open plan galley adjoining. This area, being larger than would be traditionally seen on a Westcoaster fishing
boat, can also double as a training area for small groups on board as required.

There are also five accommodation cabins that sleep 12 also.

With around eight months in design and equipment decisions for the final configuration of Investigator II, overall it was simplicity that ruled in the final design. Eighteen months construction
followed, utilising and maximising Australian content.

“We had to keep the vessel simple to meet the needs of its deployment – no digital panels for operating systems where possible and simple labels on switches, valves and other equipment”, Alan
explains.

“This was one of the philosophies behind powering her with a single Yanmar too – a relatively simple, large displacement, reliable and easy to service engine”.

The 6HYM-WET is a purpose-built marine engine which has delivered outstanding results for commercial boat operators worldwide.

The engine is a six cylinder in-line twin turbocharged configuration with single exhaust outlet and a displacement of 13.733 litres and an all up dry weight of 1385kgs.

The 6HY series is available with four commercial rated power outputs ranging from 500mhp (368kW) to 700mhp (515kW). For Investigator II the choice was made to use the conservative and
heavy-duty continuous rating of 500mhp (368kW) @1950rpm which powered her to 13.7 knots during trials – not a bad haul for a single 500 horsepower engine on close to 30 tonnes of vessel (light ship) 40 tonnes (loaded).

With close to 8500 litres of fuel on board across four tanks, there is an expected 1200 plus nautical mile range.

“It was also the client’s choice to have a single-engined vessel, and frankly, one good, reliable engine will last a lifetime installed correctly and within specifications”, Alan added.

A Mase Mariner 1600 generator provides AC power and utilises the four cylinder Yanmar 4TNV88 diesel engine to deliver its 15.3kW of electricity. It delivers this power running at a frugal 1500rpm, making for a quieter engine. 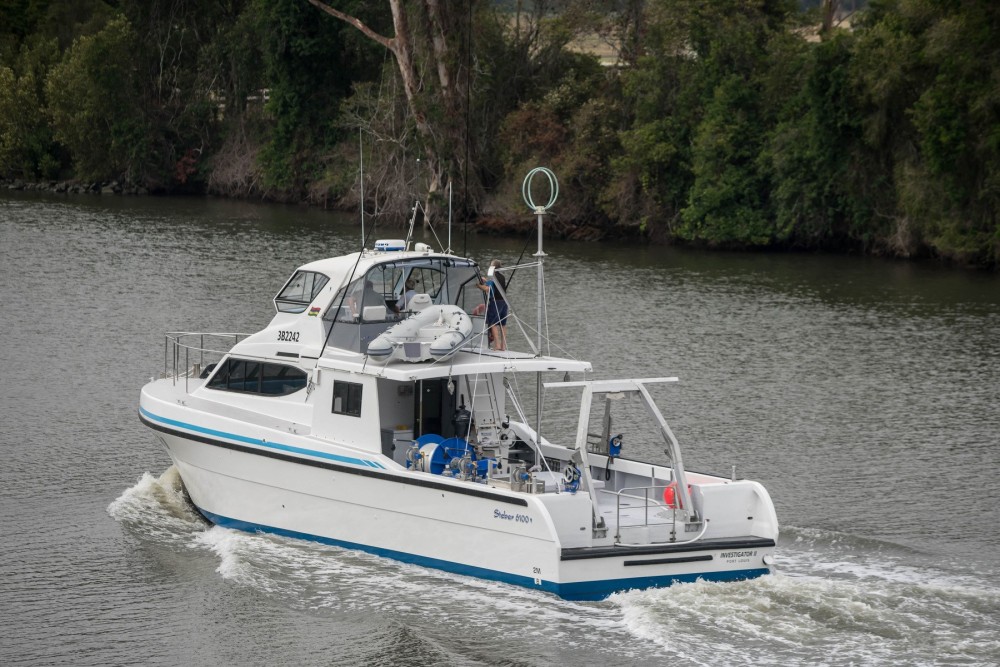 Alan has visited Mauritius and the crews and skippers who have operated his vessels a number of times over the years, building a rapport with them.

Meeting a skipper who had been driving his boats since the first 41ftr more than 32 years ago was a real thrill according to Alan – that skipper thanking Alan for the quality of his boats and telling him “we have been out in some terrible seas at times and your boats have never failed us!”.

“It was an honour to meet a man who has relied on us for so long”, Alan said.

The primary purpose of Investigator II will be to travel to remote areas and islands to fully investigate fisheries and the sustainability of fisheries in those waters. There is a species of shrimp in waters off Mauritius for example that hits the 18inch mark and this will be among the fish and crustaceans studied as part of Investigator II’s work.

Alan and Steber International are thorough in their operational training for their vessels and set a benchmark in vessel operating manuals some 30 years ago. Such is the philosophy Alan sees in the Yanmar product too – clear, simple instructions to keep a reliable engine doing what it needs to do for thousands of hours.

“On launching the boat and during initial test runs there was no vibration, it is absolutely smooth and extremely quiet,” Alan added.

“The Yanmar is perfect all round from what we have seen in its initial runs”.

The fishing equipment (right down to terminal tackle) was part of the contract, a unique proposition for an exported Australian vessel.

Investigator II was run to Sydney from Taree via Tuncurry, the 6HYM-WET serviced and oil changed with final checks, then cradle-shipped to Mauritius as a turn-key vessel ready for work.

Another fantastic partnership of quality Australian boat building and proven Yanmar and Power Equipment reliability to the world.