Steber takes the spotlight at Pacific 2017 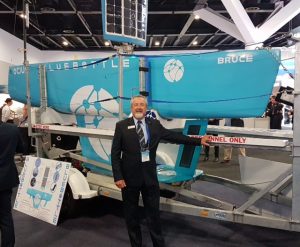 Steber was part of the NSW Government’s Hunter Defence division at Pacific 2017, with defence now a critical sector for the region’s $41 billion economy.

In all, 500 companies from 23 nations were represented at the 10th expo, which featured the leading innovators in naval defence and the commercial maritime industry.

In commenting on this year’s expo, General Manager, Alan Steber said: “A number of prime defence contractors from across Australia and overseas plan to visit our Taree factory as we are one of the few specialist fibreglass manufacturers with defence capability”.

In another expo highlight, Ocius Technology won the Defence SME Innovation Grant for the Bluebottle unmanned surface vessel that runs on solar, wind and wave energy.

The Bluebottle will be a tremendous boost to border security world-wide and has the capacity to transmit data and photographs from its ocean location, to ship or shore headquarters in real time.

Steber is a key partner with Ocius in the Bluebottle program, manufacturing the primary platform and various specialist components.

The company has just completed an application to become an Australian Trusted Trader which will streamline international business operations and expand export potential;

Wins at local and regional Business Chamber awards, particularly in the field of Export Excellence, could lead to further accolades at State and National levels in coming months.